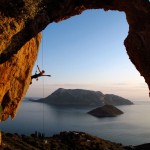 Kalymnos has been established as one of the best climbing destinations in the world. The majority of routes are situated in the northwestern part of the island where the village of Emporios and our studios are located.

Only a mere 80 metres from our studios, is the starting point from where climbers leave behind their means of transport and venture onto the climbing areas at Emporios.

In order for the climbing routes to be established, modern, stainless steel material that is frequently maintained was used.